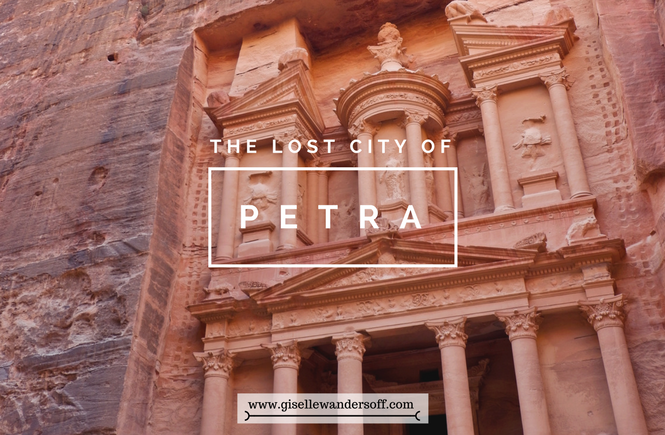 Located in southern Jordan, the once-lost city of Petra stands as one of the New Seven Wonders of the World. It’s world-renowned for its ancient structures that were actually carved into the stone mountains themselves. All this coupled with a rich history on the ancient civilizations, you can bet that Petra has long been on my bucketlist of dream destinations. So you can only imagine how ecstatic I was to experience it firsthand! 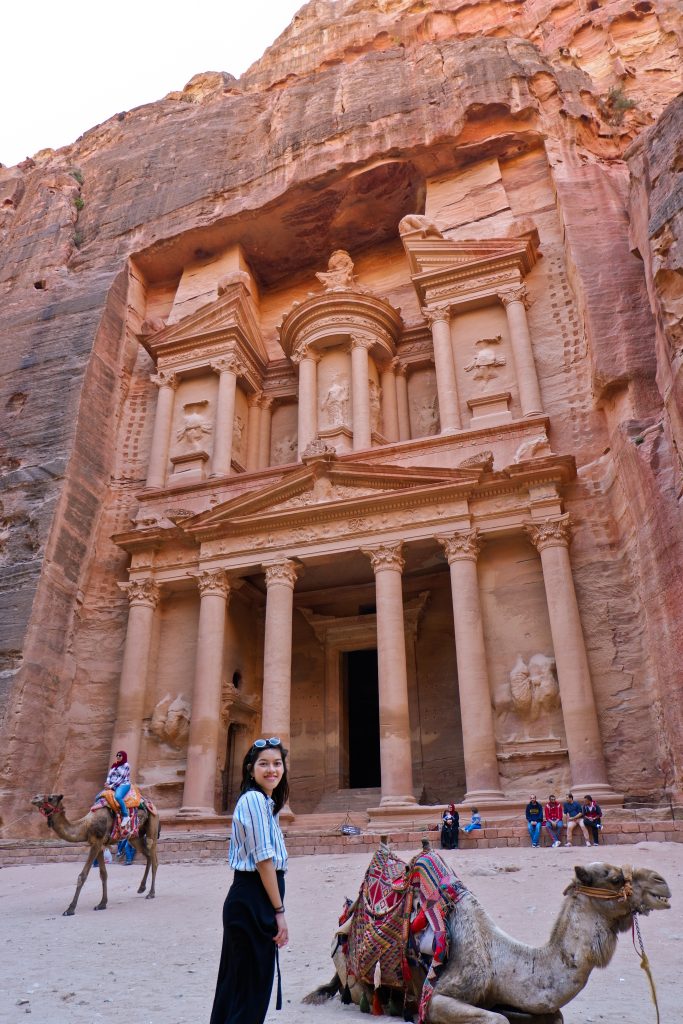 Our Holy Land tour started off in the peaceful country of Jordan, where we spent our second day in this wondrous Rose City of Petra. We stayed in Amman, the capital city of Jordan, for the duration of our visit which meant that some travelling (a 3-hour drive) was involved on the way to Petra. For those who have more time to explore, I’d recommend staying at Wadi Musa, the town right outside of Petra to save you the travel time.

About the Lost City of Petra 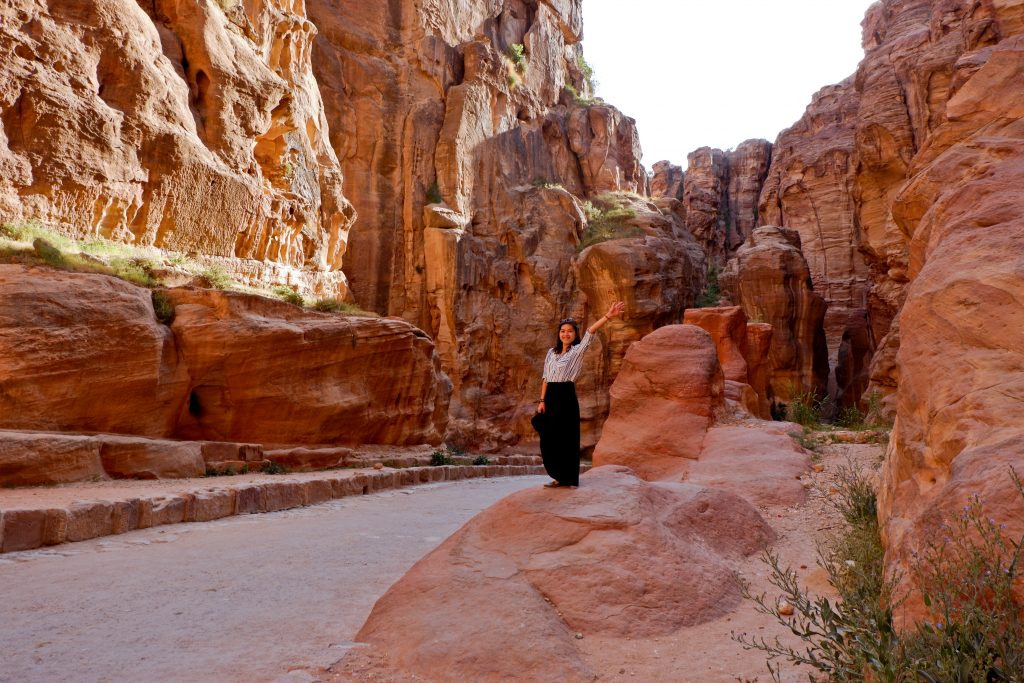 Now I don’t intend to turn this post into a National Geographic article on Petra’s entire history, but the beauty of this city is only enriched once you learn a bit more about it. It’s actually not known exactly when the city of Petra was built, but it began to flourish as the capital city of Nabataean Empire in the 1st century BC. The city became a major trading hub due to its proximity to trade routes in the region. After a large earthquake in the 4th century AD, most of the city was destroyed. But it was the transition into sea trade routes that eventually led to Petra’s downfall and later on its ultimate abandonment. After which it became unknown to the world until 1812, when the lost city was rediscovered by a Swiss explorer. Since then, this beautiful ancient city of Petra has been attracting people from all over the globe! 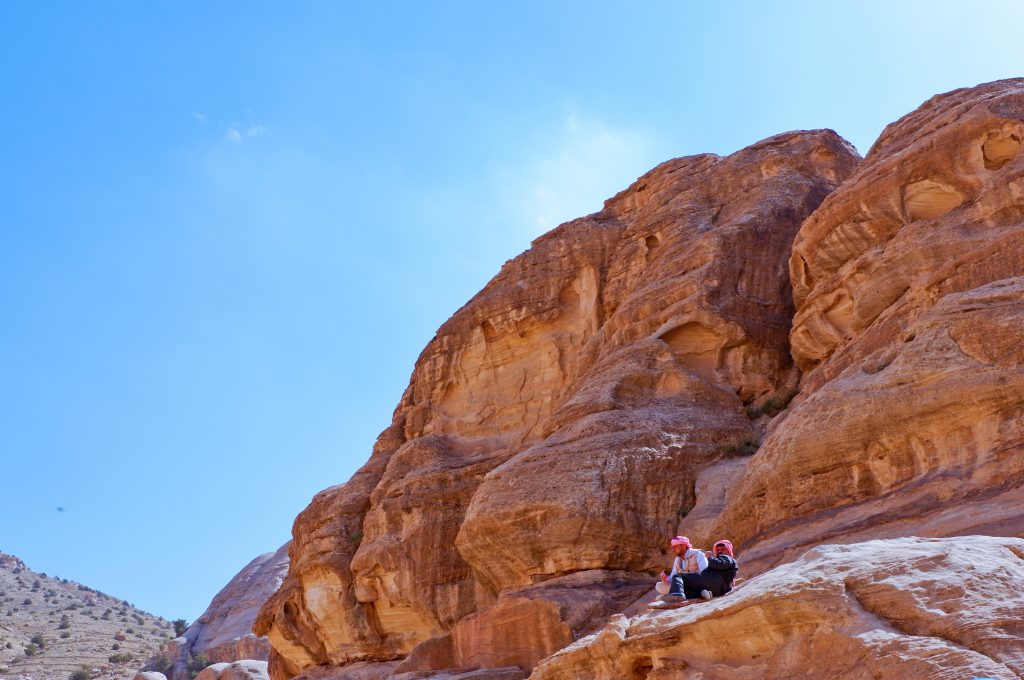 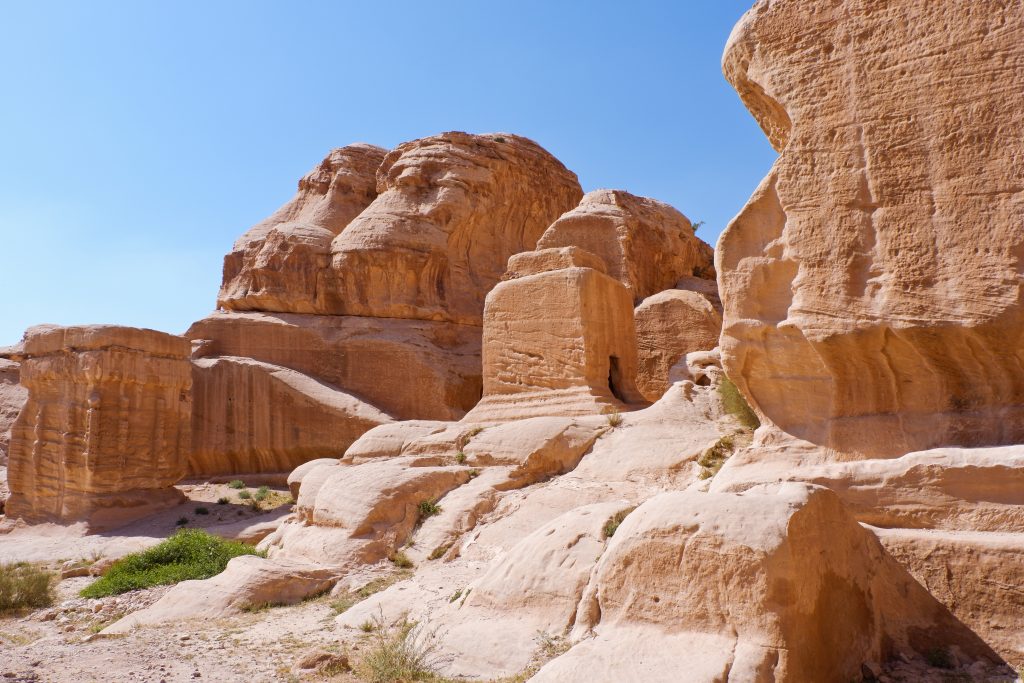 The city itself covers around 260 square kilometers (or 102 square miles) with several structures and points of interest along the entire path. Going through the entire city of Petra actually requires more than a day, especially since the different attractions in the city are fairly far apart. As our time in Jordan was limited, we were only able to go through the path until The Treasury. But nevertheless, the incomparable natural beauty of Petra’s surroundings was well worth it!

The Treasury & The Siq 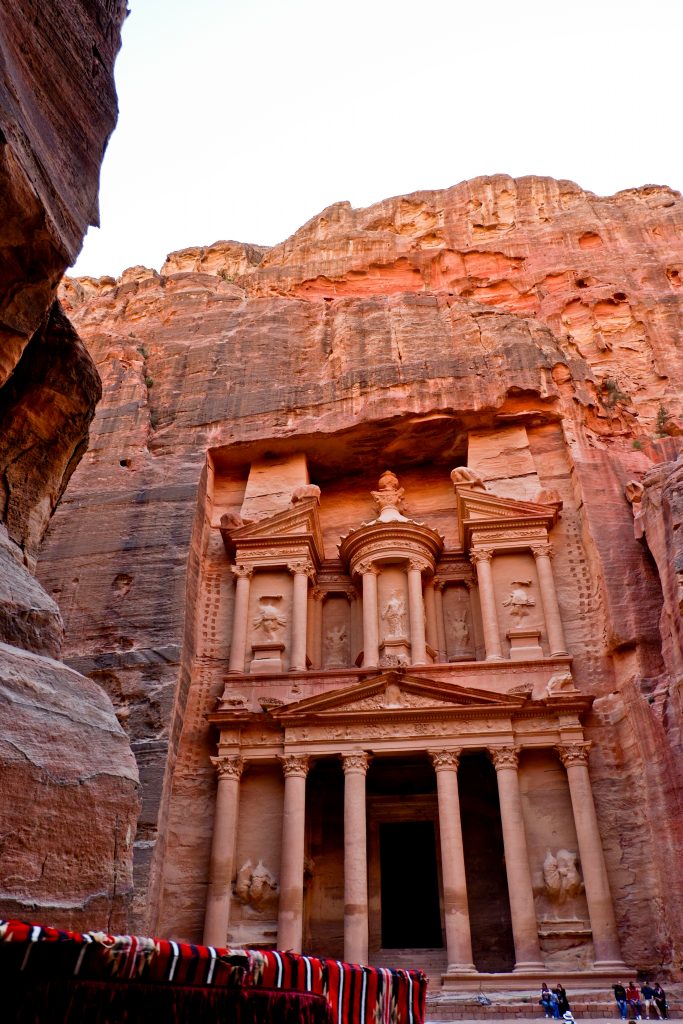 The most popular structure (and definitely most well-documented on social media) in the city of Petra is called The Treasury. This beautiful building was so intricately designed while being partially carved into the sandstone cliff (how amazing is that!) You may assume that it was used as a financial structure based on its name, but no one really knows what its actual purpose is. Most believe it to be a temple, but others think there are hidden treasures inside. I would go in and check but visitors aren’t actually allowed to go inside due to safety reasons. 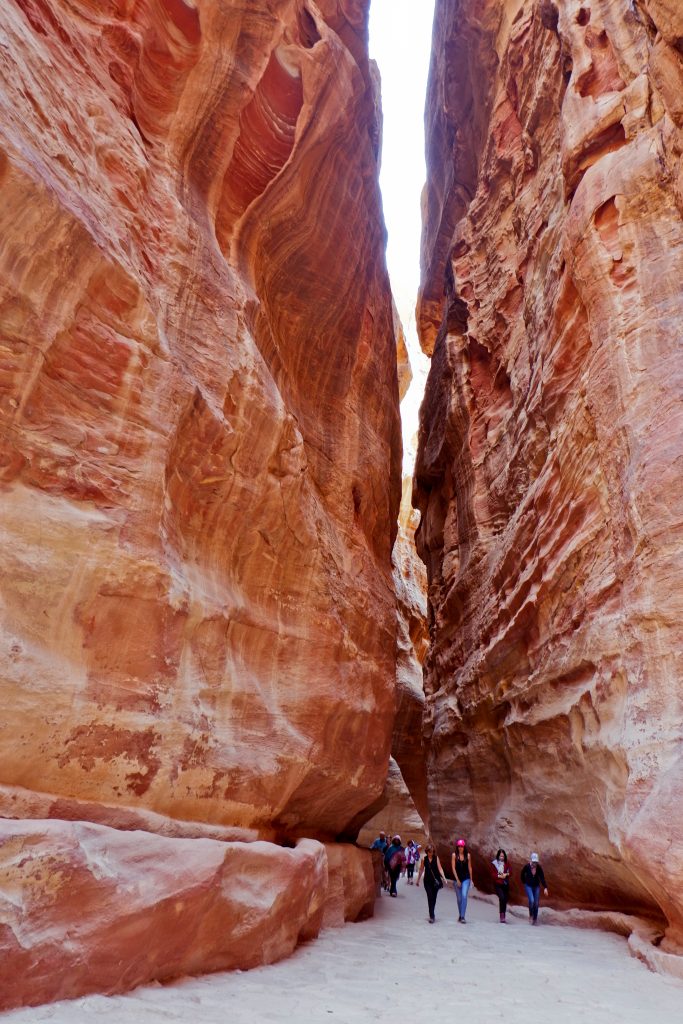 On the path leading to The Treasury is a long and narrow gorge called The Siq. An 80-meter tall rock canal running along for about 1 kilometer, this entrance to the city of Petra was mainly created by natural rock formations and partly carved by the Nabataeans. Back in the ancient times, it served as a channel to draw water into Wadi Musa. Today, it serves as the main passage to everyone’s most anticipated discovery of The Treasury. But I found it as a perfect example of Petra’s acclaimed name of “Rose-Red City” as The Siq showcased unrivaled scenes of pink sandstone formations twisting, turning and towering over us.

Since our entire trip was organized with a travel agency (Land and Sky Travel for those wondering!), all the crazy logistics were already handled for us! But as I understand, getting to Petra on your own is not the easiest task, especially since extra precautions need to be taken. (Here’s a link to a blog post from one of my favorite travel bloggers that may help!) 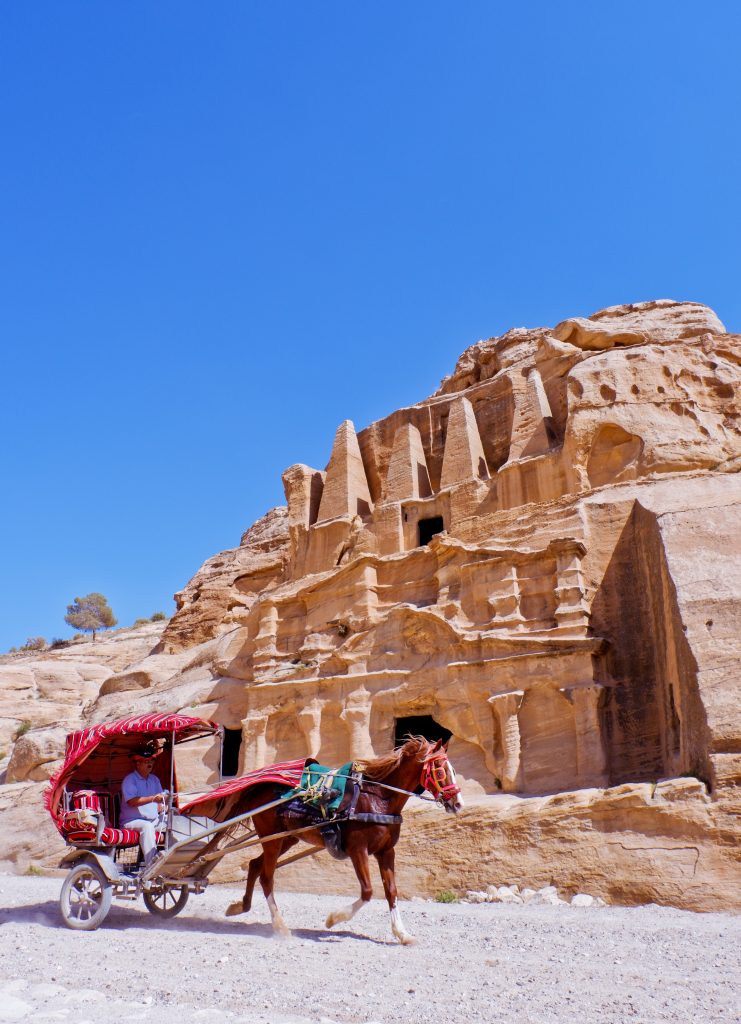 We began our walk from the entrance of Petra after lunch as we had traveled from Amman in the morning. The entire city of Petra is pretty huge; the distance from the entrance to The Monastery (the last attraction on the main trail) is actually 6 kilometers. So naturally, horse carriage rides are readily available at the entrance for an extra fee. We preferred to walk instead because a carriage ride meant that you wouldn’t be able to go on your own pace, admire the scenery and take photos! Just be prepared with comfy shoes, caps/shades, and lots of water! Don’t worry, there are some shops with refreshments and souvenirs along the trail. Right at the beginning of the trail, the surrounding rock formations made it feel like we went back in time (or even a different planet). I think this is mostly because we weren’t used to the desert terrain, so we were all wonderfully amazed and ready to take on the long hike to The Treasury! 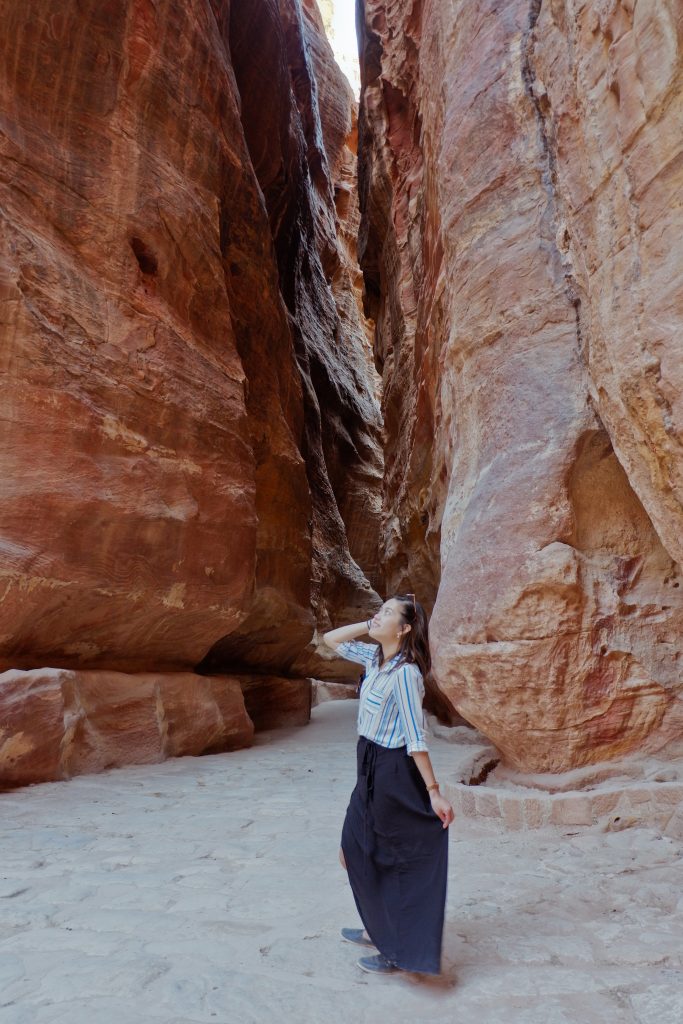 Most of our walk was within The Siq and turned out to be a lot less tiring as I thought. The towering rock canyons above us provided much shade and even better photo opportunities. The rock formations along The Siq are simply so beautiful, I couldn’t stop taking photos at every nook! Not to mention that we didn’t even notice how long the walk was because we were too busy admiring the view from below. 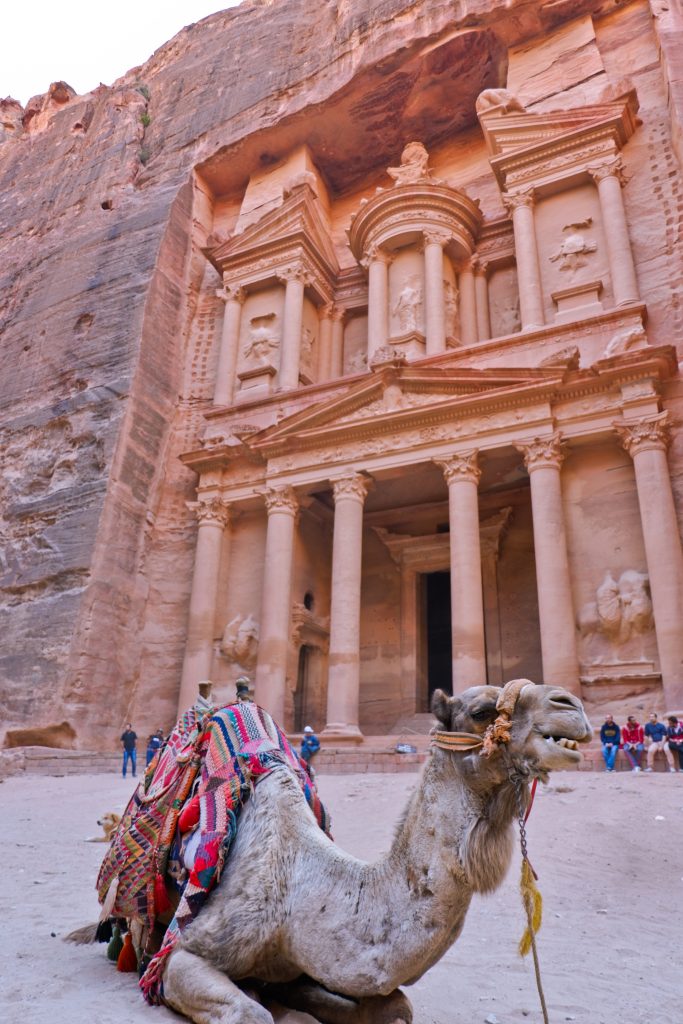 As we were walking at a fairly leisurely pace, we arrived at The Treasury at mid-afternoon. It was everything I expected it to be and more — I had to pinch myself that we were standing there! We spent around 20 minutes there taking as many photos as we could. But as with any popular attraction, the place was crazy busy with tourists, locals trying to sell souvenirs, camels walking around and horse carriages almost running people over! So taking good photos was definitely a challenge. Though that never gets me down, it was all just a dream being at The Treasury and experiencing all of it! 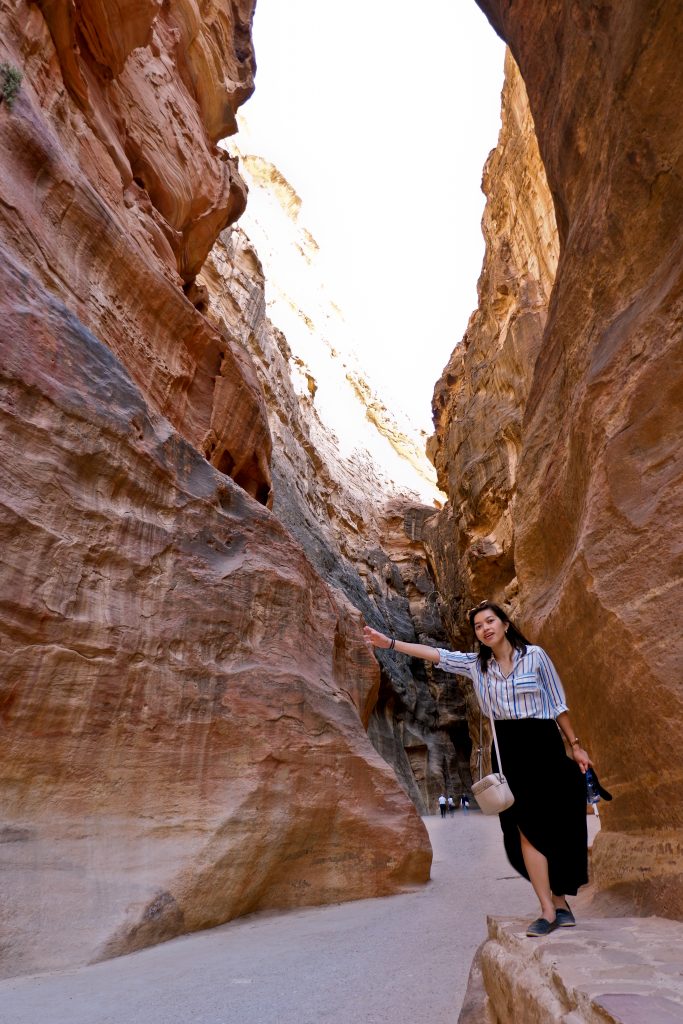 Now, the Instagram-famous “from above” shot of The Treasury is usually taken by going up a nearby cliff. Many local Arabic nomads called Bedouins (usually characterized as the guys in kohl eyeliner) come up to you and ask if you want to go up the cliff to get these shots (for a fee!). But be warned: going up there is actually illegal. This path is not part of the main trail and is not properly regulated. It could potentially be dangerous, so take caution. 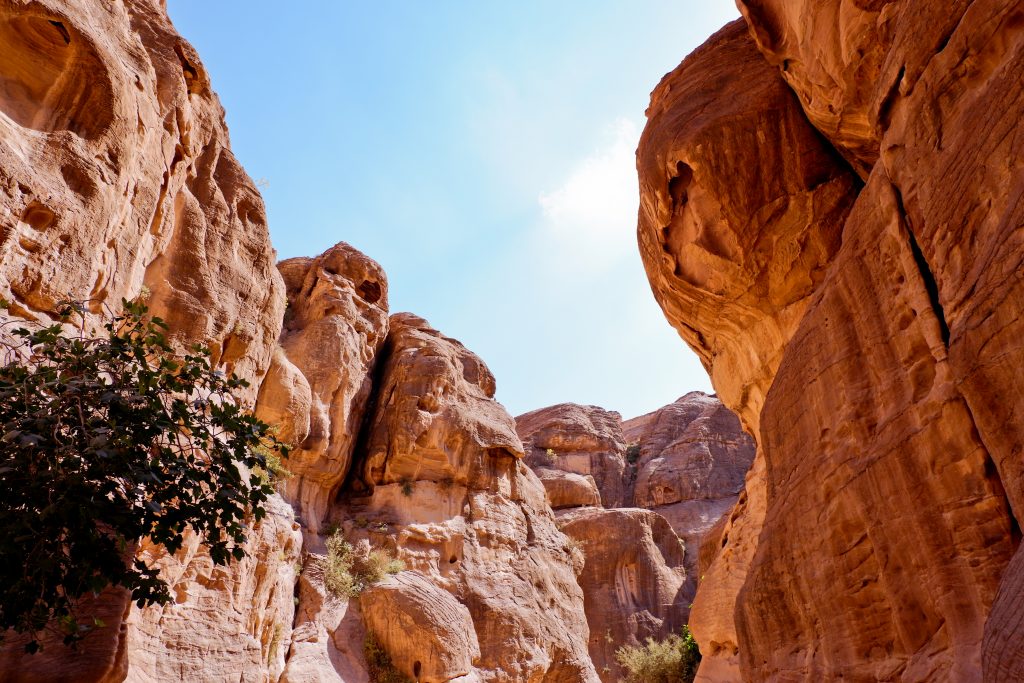 After our magical time at The Treasury, we walked back to the entrance along the same path and took some better photos at The Siq as most of the tourists had already left. We got back to the entrance just as the sun was going down, so let’s just say we squeezed out every second we had at this wondrously amazing wonder, the Lost City of Petra!

I’ll definitely be coming back to Petra again some day to see the rest of the city! How about you? Have I convinced you to take a trip to this ancient wonder? Or even add it to your bucketlist? Let me know in the comments below! I’d love to hear from you 🙂

I visited the city of Petra in Jordan in April 2018 as part of a two-week Holy Land tour. 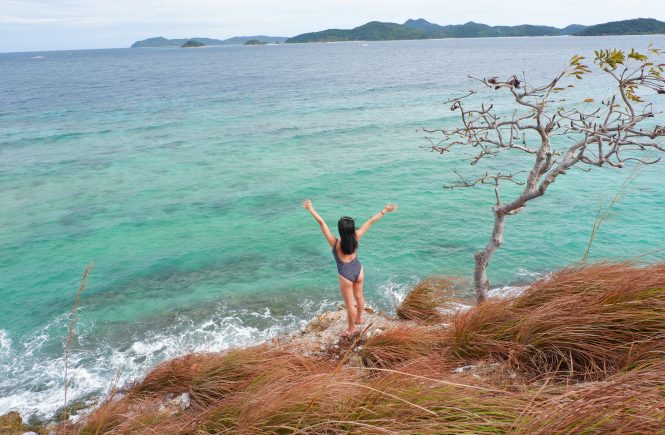 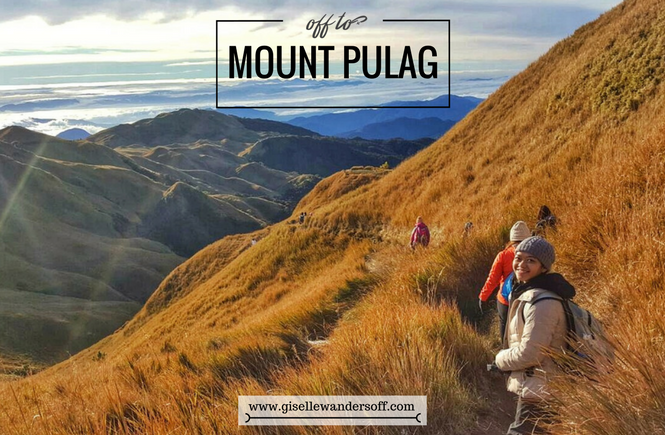 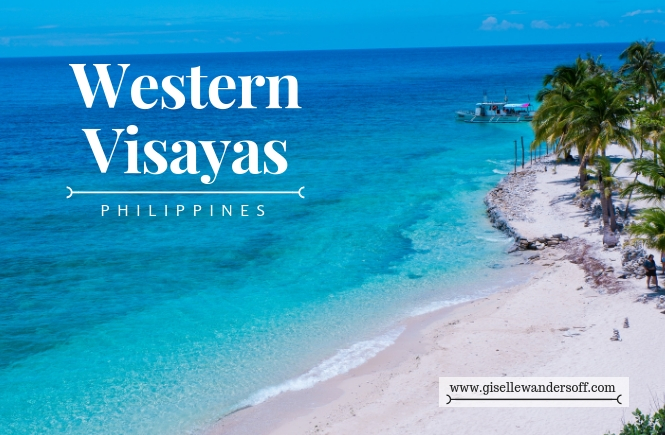 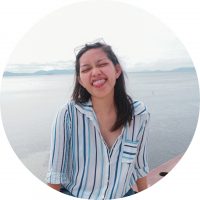